Is Chi Running right for you?

I never really learned how to run. I played basketball, tennis, baseball and soccer as a kid, and in those sports, running was either part of the game or a punishment. Until I started running in Five Fingers in September 2009, my versions of running were fast, slow and gingerly in an attempt to avoid […]

Most runners will tell you to push through pain. Be a tough guy. Unless you’re injured, most long-distance runners will say that pain is a natural part of the running process and while it’s a sign of possible impending injury, it’s usually just you being weak. In the barefoot/minimalist world, that advice is crap. Running […] Not everyone likes to run alone. I sure as hell do, but I only like being alone for the actual running part. The rest of the process, including stat tracking, daily/weekly/monthly challenges and recommendations on gear and form, is way, way more fun when you include other people. DailyMile is one of those sites. Great […] Barefoot Ted might tell you that “a numb foot is a dumb foot,” but he’s being too nice. A numb foot means a dumb runner makes more sense and places the responsibility for our own well-being on, well, us. Minimalist runners have to be especially careful during the colder months as they are much more […] These Vibram things seem to be catching on. From seeing them around the gym, spotting an entire company sporting them at the office and even my parents inquiring about a pair, Five Fingers are steadily moving from niche to accepted footwear. I’ve seen them in races, around the office and have been repeatedly stopped on […] FiveFingers as a gateway to Paleo

Five Fingers change the way we walk. They change they way we posture and they change the way we run. For years I asserted my dominance physically by standing tall, wearing shoes with slight heels and striding heel first across the room. It felt powerful to stand straight up or even lean back a little. […] 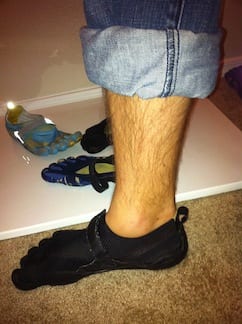 I’ve seen people working out in Five Fingers. I’ve seen them run in Vibrams and I’ve seen them walk around the house in them. I’ve even seen plenty of people wear them every once in a while around town. But I ain’t never seen a full-time Five Fingers guy that wasn’t me. Whether I’m in […] Five thoughts before my second half marathon in Vibram Five Fingers

I’m not a novice runner. Before I first tried Vibrams, I’d been running off and on since high school, most 3-6 mile jogs as punishment after parties, because I was bored or simply because it was the best time to listen to audiobooks. I didn’t run very far, nor did I run super fast. And […]